When you’re working towards a tight deadline, the last thing you need is to have to make multiple passes over the same material (2x or 4x) to make a single cut. You need a tool that was made to do the job without fail. You need the Big Foot Saw. As the original 10 ¼” worm drive beam saw, the Big Foot was designed by a framer with 27 years of professional experience and continues to be perfected to this day by real framers and carpenters who understand your needs on the job site.

If you could finish your projects faster with better results, wouldn’t you? The Big Foot Big Foot 10-1/4” Worm Drive Beam Saw can cut two 2x headers or one 4x header in a single pass enabling you to speed up your production and custom framing jobs. The Big Foot 10-1/4” Beam Saw uses a blade with a thin kerf and zero blade flex that lets you cut perfectly straight every time. Designed by a professional framer who wanted a better tool, the Big Foot is light, comfortable, and reliable, but be careful. Once you experience the difference, you’ll never want to use your old saw again. 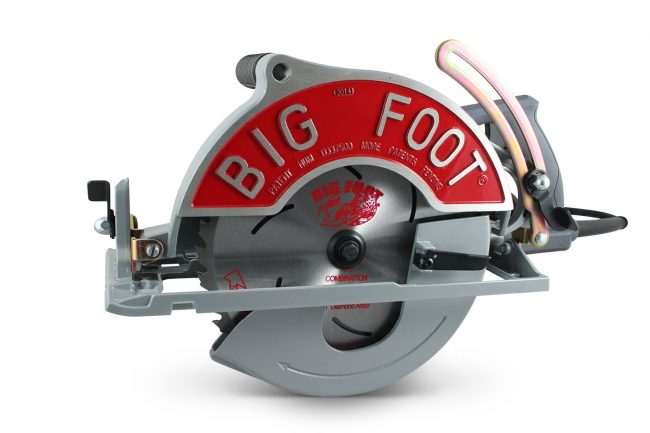 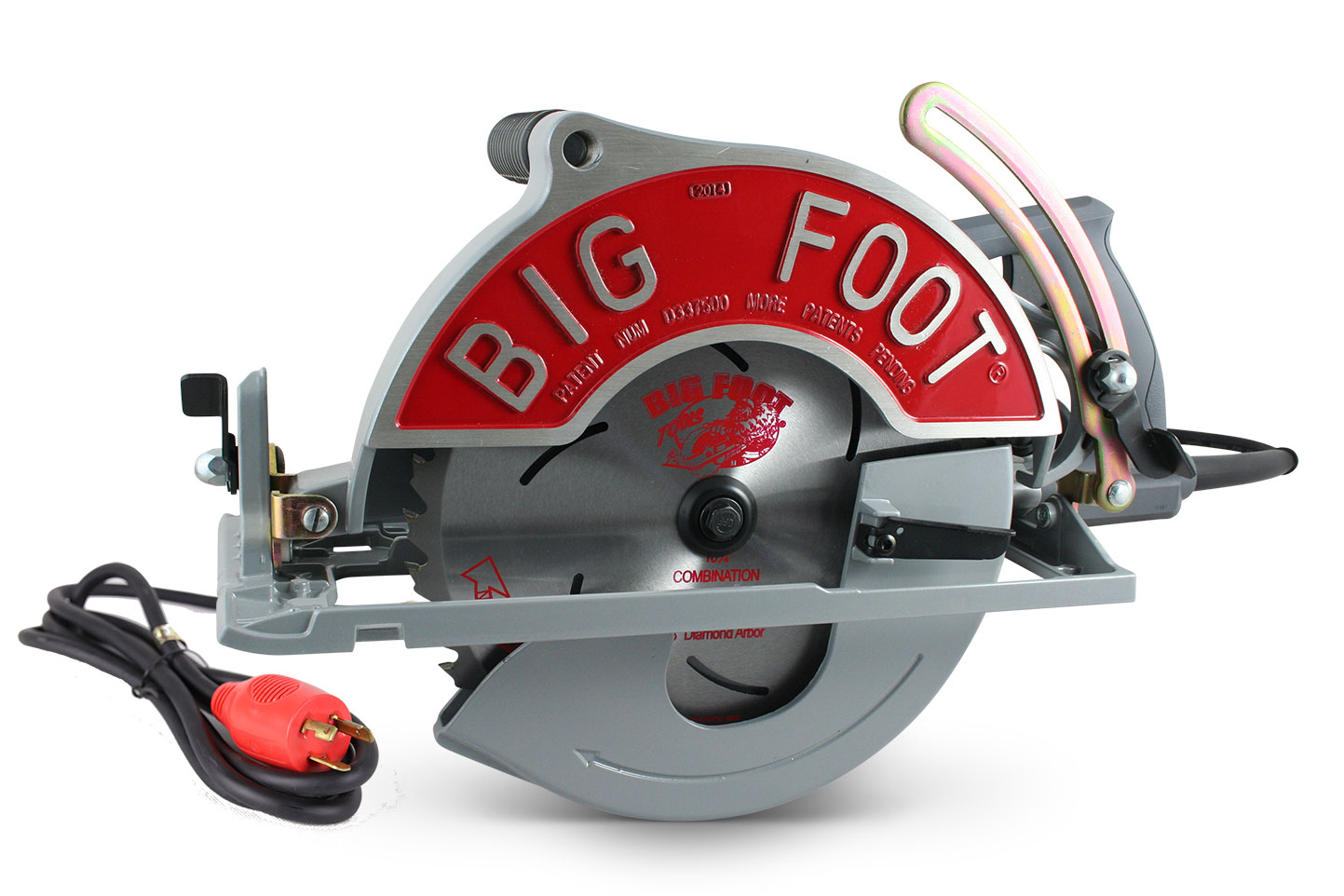 Our blades are designed with the perfect balance of strength and ruggedness. The high carbon steel, heat-treated Big Foot blade with 36 carbide-tipped teeth is the ultimate general-purpose blade. We use the best grade carbide teeth, a thin but strong steel plate that resists blade flex and gives you a clean, straight, controlled cut. Our thin kerf blade helps prolong your saws life by putting the least amount of stress possible on the motor allowing higher RPMs and better resulting cuts. In just one pass, the Big Foot 10-1/4” Worm Drive Beam Saw can cut 4x headers or double 2x headers, exposed deck and porch beams, 4x4 posts, or 7 sheets with ½” plywood. Finish your projects faster with a Skilsaw® powered machine that gets the job done without cutting corners. 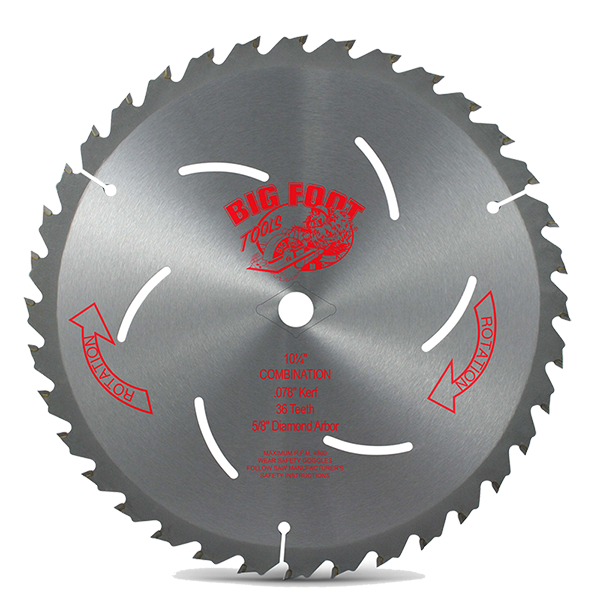 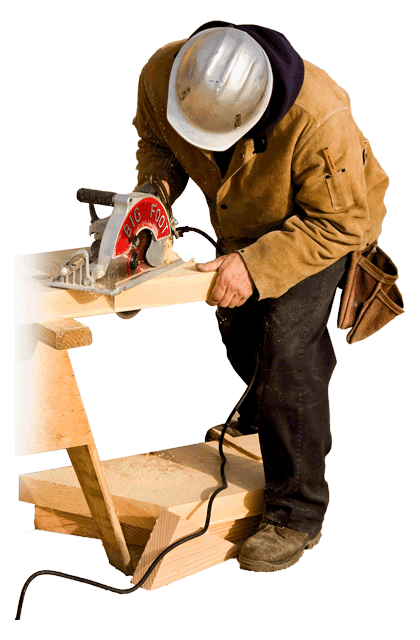 17lbs. of Performance, Comfort, and Durability

The Big Foot 10-1/4” Worm Drive Beam Saw was deliberately designed to be lighter than our competitors’ comparable saws because weight matters when you’re working with a tool all day long. This well-balanced machine was designed by a framer with almost three decades of professional experience. He had the insight to create a high-performance beam cutting saw that’s comfortable to work with during long projects. He was also familiar with the conditions framers and carpenters often work in, so the Big Foot was designed to be rugged enough for even the toughest job sites.

Making more of your cuts in one pass doesn’t just make for cleaner work. It makes your work go faster too. Trade your existing 7-1/4” Skilsaw® or framing saw for a machine that handles your biggest jobs more efficiently and feels comfortable to use all day. Get more done in less time and enjoy an even better result than you’re currently getting when you spend less time on each project. It’s a no-brainer. The Big Foot Big Foot 10-1/4” Worm Drive Beam Saw is the best Skilsaw® powered saw you can get for framing with 2x and 4x materials. Do yourself, your business, and your next project a favor and upgrade to the Big Foot Saw. 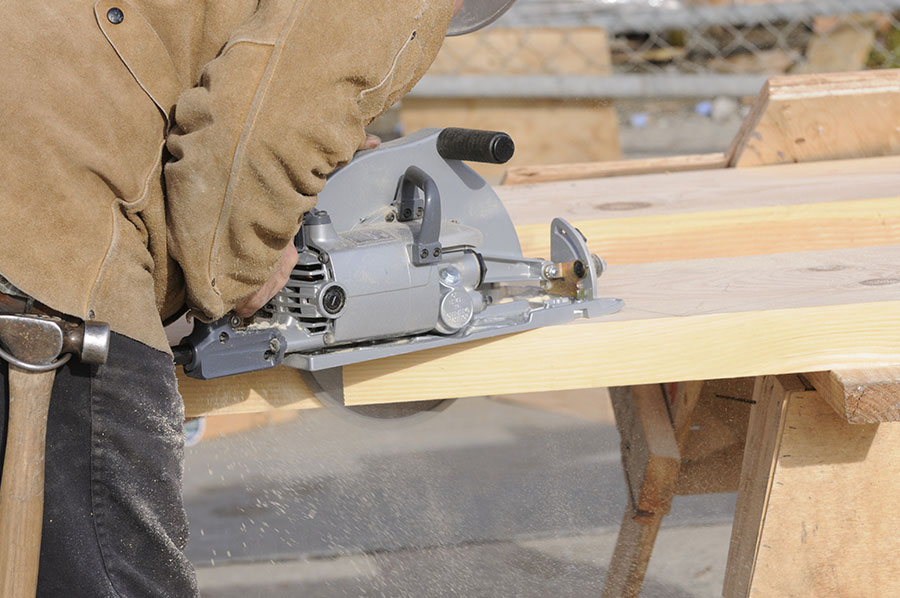 Compare Us to the Competition

See what the Pros Say About the Big Foot Saw

Big Foot Tools is a great company with excellent service. Dino provides top notch service. My first Big Foot was purchased over 20 years ago and it was still running strong and somehow disappeared over the last year. So I purchased the newer Big Foot model which is improved over the previous model in many ways. The Big Foot far surpasses what the Sawsquatch provides as it is lighter, more well-balanced, has a wider table, and comes with a much better Big Foot blade. The Sawsquatch comes with a POS Diablo 40 tooth blade that will wobble and if you are ripping, do a really bad job leaving the top side somewhat straight and the bottom cut really wavy; whereas a Big Foot blade, are best in the market for these larger beam saws! I ripped a bunch of headers down with the Big Foot & Big Foot blade in place and cut straight on both sides perfectly! The Big Foot also cuts at a 90 degree angle depth of 3-7/8” where the Sawsquatch cuts 3-5/8”, both cut the same at a 45 at 2-3/4”. Both saws are made in China; however, the Big Foot is assembled in the USA. Big Foot has is 5300rpm where Sawsquatch is 4700rpm, which may be the only thing the Sawsquatch might (apparently the lower RPMs are too cut through the material better) have over the Big Foot; however, I have had no bogging down problems with the Big Foot saw at the 5300 RPMs. They also both cut up to a 51° angle. You can buy an accessory for the Big Foot though in which you remove the table and add a 75° table which you cannot do with the Sawsquatch! You can purchase a 24” Big Foot rip guide to use with the Super Sawsquatch or the Big Foot.
- Gregory Rocha
One of the divisions in my company is building heavy timber structures. I have bigger saws but this is the one that gets most of the use. It feels like a regular worm drive but will cut nearly 4" deep, perfect for 4"x6" and 4"x8 rafters and joinery. We even use it on the bigger timbers and just flip the timber to access the other side for the second cut. It's easier than breaking out the big saw. If there's lot's of big timbers to cut the big saw would be better but for most of our joinery and cut offs we use this one. I wish it had more power but it still does fine. A bump up in power requires 240 volts and converters, too much headache. The blade that comes with it is pretty good but put a real good carbide blade on this thing and you can do some very cool work! You won't be disappointed.
- Thomas Brasby
I used one of these to rip dozens of 8x8x18 reclaimed timbers of varrying Species, red, white and yellow pine. Full depth passes, at a reasonable rate of feed. 8+ hours a day for 4 or 5 days straight, milling drop joists for a timber frame loft.

I was so impressed with this tools abilities that I had to own one for myself. Saved my pennies and bit the bullet.

Very satisfied.
- Kas Simpson
Used it for the past week and love it. Visibility in line of sight is good, powerful motor. The wider base plate i thought would be bulky at first, but turns out is super nice. Motor has plenty of power. I read some reviews where people were have issues with the guard spring being to stiff. I haven't had any issues. The weight is surprisingly low when factoring in the size of the saw. Great saw, recommend it over the Skil's Sasquatch.
- Timothy D Halzerig Jr
This saw is a must have for the guy or lady who cuts lumber larger than .2x4. Great for headers and post. It performs great and has a lot of power, use the recommended power cord. I would recommend this saw for the builder, pro or homeowner.
- Richard Manley
This saw will get the job done, no matter what. The quality of construction is excellent and the saw works every bit as good as promised. It has plenty of torque and is easy to hang on to. It is a bit heavy but with this kind of power it works to your advantage. Would recommend this saw to anyone.
- Alex
I'm really happy with this saw. It performs just as I expected. I've been using the Big Foot for several years now. If you're cutting 4x stock, you shouldn't be without one of these.
- KailuaMauiMama

Free Big Foot T-Shirt When You Return
Your Warranty Card

When you return your warranty card for your free one-year warranty and include the provided form, you’ll get a free

The Man Behind the Saw

We’ve mentioned that the Big Foot 10-1/4” Worm Drive Beam Saw was designed by an actual framer. Why is that important? It’s important because only a framer or carpenter can know exactly what it is you need in a saw. A tradesman with 27 years of professional carpentry, framing, and remodeling experience, Robert Hutchings, created a tool that would outperform the existing Skilsaws® and framing saws on the market while providing a more comfortable feel and lighter weight for all-day use.

Robert may have gotten the ball rolling, but today, we continue to test and improve our tools to respond to what real professionals are looking for. Who are we? We’re real professionals, too. We’re tradesmen who have made a living as carpenters and framers, and our designs are a reflection of our experience, expertise, and standards of quality. We’re a downhome company run by honest people who know the industry and we’re always looking for ways to make our tools stronger, lighter, and more efficient.

Built in the USA

Each Big Foot 10-1/4” Worm Drive Beam Saw is hand-built right here in the USA. Henderson, Nevada, to be precise. Take confidence in the knowledge that your saw was made and tested by professionals just like you, right here at home.

We know a professional-quality tool can be a big investment and you want to know it’s going to last you. Get complete protection against factory defects and damage for an entire year after your purchase.